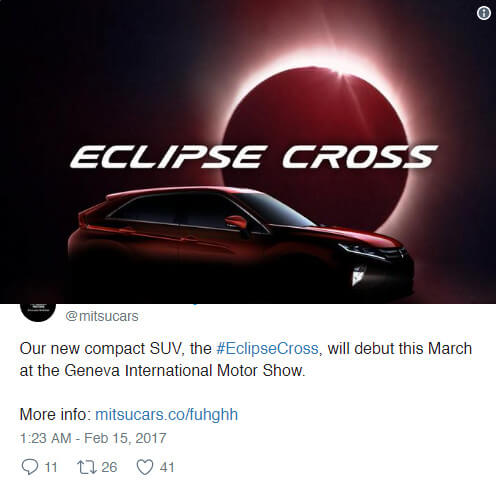 Mitsubishi Motors has a legacy of exciting automotive design and driving enjoyment, and they're always looking to improve upon themselves. Each model just seems to get better and better. That's why we're especially excited to see the reveal of the all-new 2017 Mitsubishi Eclipse Cross at the 87th Geneva International Motor Show in Geneva, Switzerland this March. The name Eclipse was chosen as a hat tip to the eponymous model sold in the US, and the word Cross is an abbreviation for crossover. Mitsubishi writes that the name was chosen to reflect the fluidity and boldness of the vehicle, and that they want the Mitsubishi Cross to "bring about the same sense of excitement and inspiration as the diamond ring seen immediately before and after a total solar eclipse does." The exterior color – a newly developed high-saturation red – was created specifically for this model, and is meant to reflect the striking intensity of a solar eclipse. Critics and drivers will get their first glimpse of this revolutionary compact SUV in a few short weeks in Geneva. While we're waiting for the big reveal, stop by Glendale Mitsubishi in Glendale, CA to check out the entire revolutionary lineup of new Mitsubishi models in our inventory.